The UK Cardboarders' Collective - A Show at Dungeness Open Studios 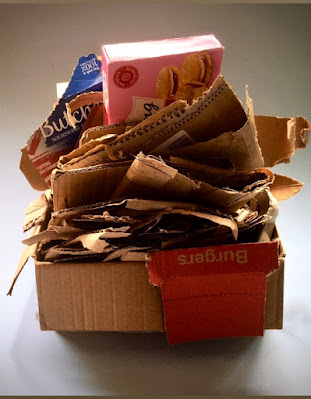 *Extended until Sunday the 1st of August* 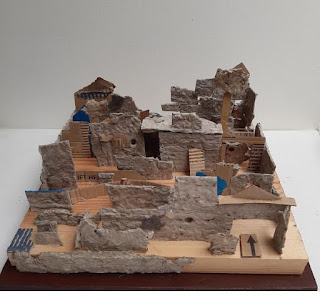 Below you will find images from each exhibiting artist.

These are a glimpse of individual takes from each member of the collective.
This is the first time ever (as far as we are aware) of artists working together with cardboard, in order to mitigate the soul-destroying effects of the plague!
Press release, project description, bios and statements follow, below these images.
Andrew Ashton 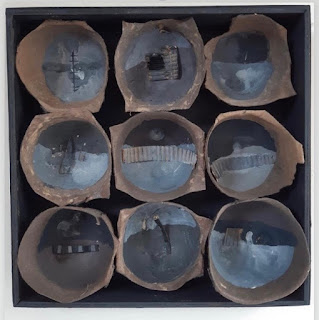 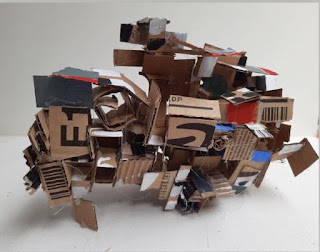 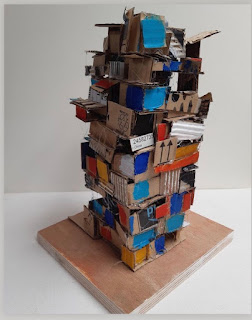 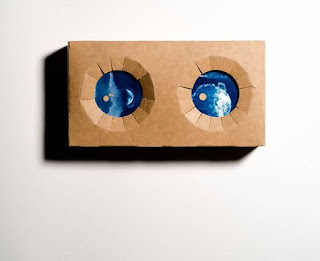 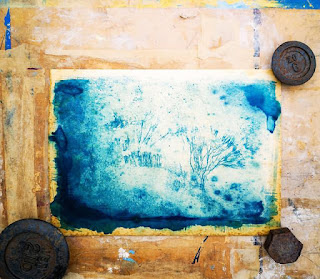 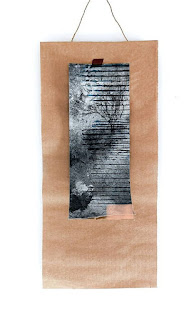 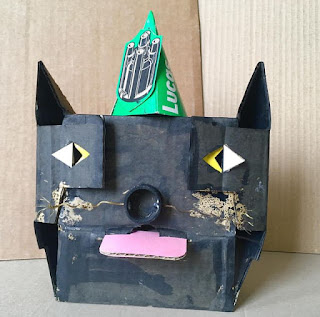 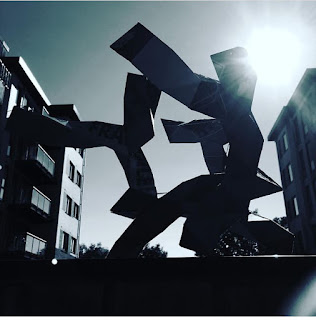 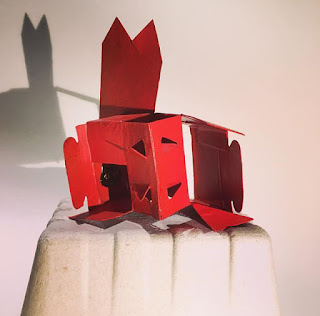 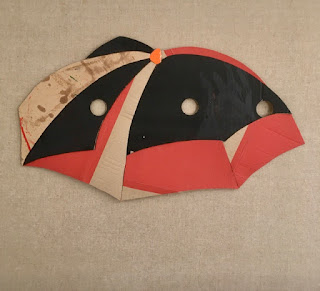 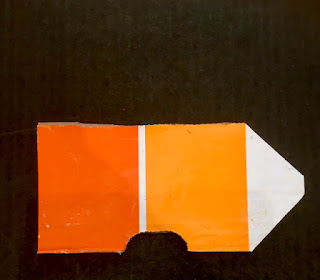 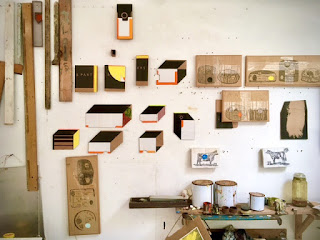 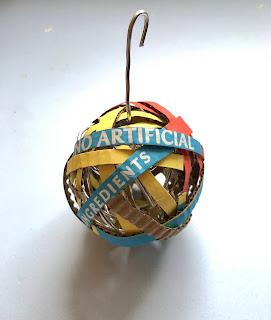 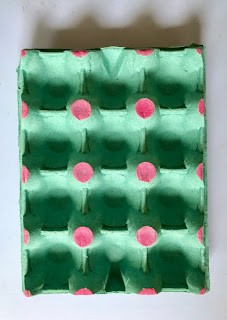 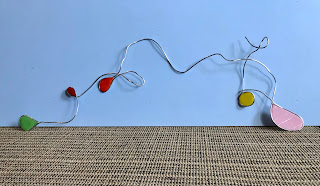 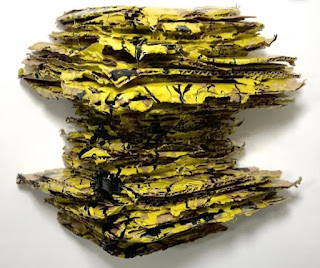 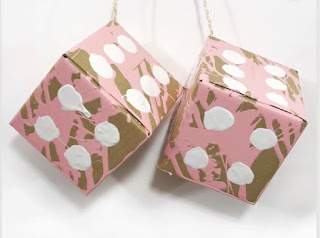 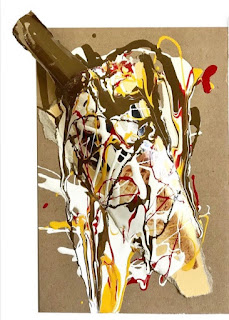 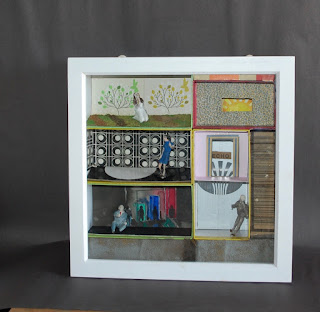 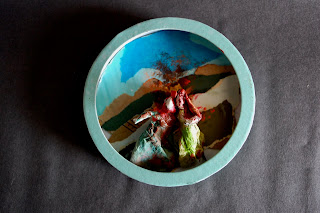 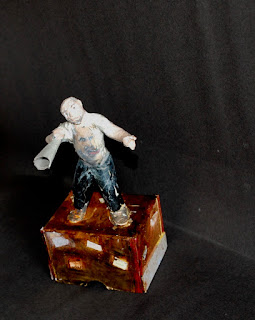 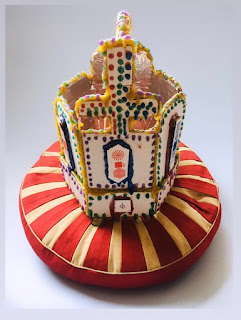 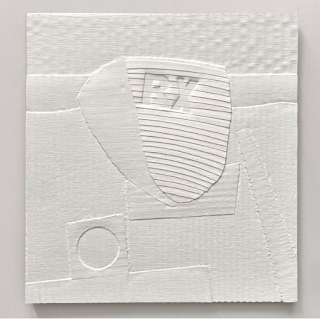 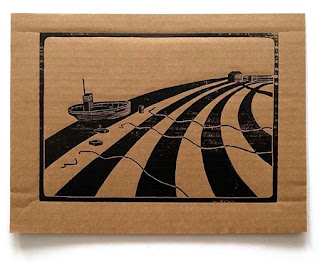 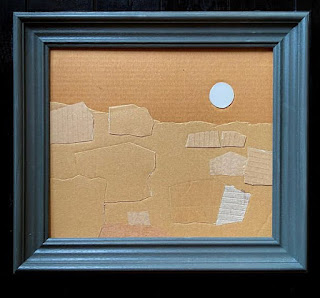 During the dark days of lockdown, I noticed three things:

1.       The house was filled with packaging, more of which arrived daily.

3.       The need to ‘carry on’ making and conjuring up work as before seemed unnecessary.

I thought: ‘What is it that surrounds me?’ then decided to embrace that which I had a lot of. So: cardboard.

Cardboard as a creative medium has a long and distinguished history in art. The movement known as arte povera elevated ‘poor materials’ for very good reasons.  See: https://en.wikipedia.org/wiki/Arte_Povera

As I started to explore ‘the cardboard’, I noted other artists became interested and supportive of the obviously freeing processes resulting from this focus. From this grew the UK Cardboarders Collective, with cardboard itself as the primary manifesto…

Artist and curator of this exhibition

I have always been intrigued by the models that architects make to illustrate a proposal for a building project. I wanted to use Amazon cardboard packaging to produce my own small scale architectural sculpture, based on the idea of imaginary architecture, created from waste cardboard. I have called this series of work “The Amazon Housing Project”, what I wanted to achieve (I think) is to:

2)      Reflect on Amazon as a multinational company.

3)      Recycle, in a creative way, the cardboard packaging used by Amazon.

4)      Enjoy the different qualities of cardboard, building with it, its texture, printed graphics and colour.

I’m also experimenting with making pulp out of Amazon packaging, in a sense returning it to its original state and creating something new from it.

I live on the South Coast and alongside my practice as an artist I currently lecture in photography at Higher Education level.

This is a Cardboard panic attack!

I champion the beauty of cardboard, the found and reused, and its plainness.

These works explore pure photographic aesthetic explorations on the surface through the structure, and manipulations of the texture itself, instead of preserving all of its visual recognisability. Transforming its visual quality into the photographic imagery. Using traditional photographic materials, chemistry and processes.

My name is Fraser. I suffer from a strong sense of ‘imposter syndrome’; I rarely regard myself as an artist. However, I achieved an art O-level in 1982 and enjoy printmaking and painting.

Cardboard’s disposable nature makes it vulnerable to guilt-free abuse. So I’ve tried to treat it with irreverence and disdain. I love the simple childish pleasure of cutting cardboard with a large pair of scissors. I’ve been using very traditional high quality materials to date, which breeds preciousness. Using this humble, invariably brown, material has injected a new freedom into my making and I thank it for that.

Helen Gillilan was born in Cornwall and attended the Foundation Course at Plymouth Art College in the 1970s. In the mid-nineties she resumed her art education – studying Theatre Design at Rose Bruford School of Speech and Drama in London.

She hosted her first solo show at Bridport Art Centre, followed by inclusion in several group shows at SW galleries. In 1993 she travelled to Chile as Field Artist with a Raleigh International Expedition – with another solo show at The Collaton Gallery before moving to London to study theatre design in 1995. She continued to paint and show through her college course at Spitalfields Art market and a solo show at Greenwich Theatre.

After college she worked with Paddy Hamilton at his London studio and then the pair moved to Dungeness and established Dungeness Open Studios. After her mother’s death in 2001, Helen purchased lovely Ocean View, Dungeness and opened her studio gallery there in 2016. Work can be viewed at the gallery or online at ocean-view-studio.com.

I didn’t see myself as a constructor until I was called upon to build model boxes for theatre designs – and at first, I was daunted by the prospect. Then I realised that I could include all manner of found and everyday things to make the elements that I needed – a little pram fashioned from a favourite face cream tube, chairs and tables in 1/25 made from found pieces of wood or cardboard...Cardboard – The Mainstay – and these models in entirety were the expressions of undercurrents, shadows, the unspoken and implied metaphors.

This winter I tackled lampshade making, which I had wanted to do for ages, and found that backed paper was an effective building material for them. As a natural progression...I leapt at the chance to show with the UK Cardboarders’ Collective...Good timing!

Education - Manchester Polytechnic (Foundation) and Chelsea School of Art. Founder of Dungeness Open Studios. Works on and with the endless fascination of Dungeness Beach.

Has shown extensively in the UK and internationally.

See above for intentions re: this exhibition.

Born in Co.Tyrone, Northern Ireland, leaving in the mid 80’s to attend art college in Liverpool.

For the past 25 years I have focused on making art for public spaces throughout the UK and Ireland working across art forms to engage communities in the creative process. A member of Royal Society of Sculptors and The London Group, one of the UK's longest running artist-led collectives.

Currently working on a large, commissioned project for Knowsley Council to produce major landmark sculptural works for four gateway locations around Prescot. The works are linked to Prescot’s heritage with connections to the Shakespeare North Theatre currently under construction in the town.

Previous commissions and exhibitions include award winning bronze work at the Alley Arts Centre in Strabane, Northern Ireland along with public commissioned work across the UK. Work has been exhibited in various galleries and alternative venues in the UK, Europe and Canada.

On working with cardboard:

Drawing and experimentation have formed the backbone of my practice so this opportunity to explore cardboard and make work for this exhibition has provided an interesting challenge and one I am still working through.

I have mixed feelings about cardboard thus far.

It is not a material I would usually turn to unless building some clunky play armour for my son or a den/tunnel system for him to crawl around in. These things are never precious and tend to get battered very quickly!

At the moment I am lost in cutting, slicing, tearing and drilling the stuff with varying degrees of success.

Possibilities unfold the more I explore so am expecting some unusual outcomes for consideration.

Typically my first “sculpture” memory was made in clay; a very elegantly modelled Brontosaurus, however the second was a cardboard Tiger, fashioned from various domestic discards – an altogether more characterful boxy cubist fella, slathered in black and yellow tempera with smartie disc eyes!


Then the die was cast; material and method stuck from an early age and the role of “Constructor” became the modus operandi for my life to follow.

Whether hacked-at cartons or fancy acid free sheets the humble card is my preferred material for the exploring, rendering and solving of three dimensional problems – despite having absorbed the world of digital 3d modelling for commissions and designs, at some point there will be a series of cardboard models in the real world – that childhood facility to sort it out with a craft knife and some tape never fails to find a variation or pull a complex project together.

Of course, for over a year we have been tethered to our homes and bubbles, I’ve been lucky as an artist that this suits me to a degree, but my foraging for objects and metals at the stockholder and scrapyard
has been curtailed – replaced by a new material source in my hallway, a familiar stack of cartons and packets from the post bringing the books and records to get me through the lockdown.

Inspired by my other Cardboarders I’ve been getting stuck into this pile of boxes to transform it into some sculptures, but this time not in the service of a problem-solving maquette medium but an opportunity to play
and improvise in the spirit of that boxy animal long ago.

Graduating from Art College in Gloucestershire some 30 years ago Andrew’s 3d career embraces medical sculpture, product design, public art commissions, a parallel life as a theatre carpenter and sculpture
tutor.  Since 2008 he has worked from ACAVA studios in Acton, London, regularly exhibiting and undertaking commissions. He is represented in the UK by Noon-Powell Fine Art.

Matt Rowe’s background in contemporary art and craft ensures that specialist creative skill sets can be tailored to suit any audience, working either to a brief or self directed.

Go Go Whippet workshops deliver engaging themes and activities that encourage participants of all ages to generate ideas and discussion through making.

With over 12 years' experience of developing and delivering professional engagement strategies,  Go Go Whippet is able to provide consultancy on approaches to community cohesion in areas of urban regeneration.

Matt explains his approach to cardboard:

Early memories of creativity are interwoven with the pleasure of receiving an empty cardboard shoe box or cereal packet.

While inspecting, grading and preparing cardboard for construction, I distinctly remember the moment I discovered the fascinating printer’s calibration marks hidden beneath the glued sections.

Like a rare Byzantium gemstone, their rarity in contrast with the volume of the cardboard elevated them beyond the rest of the material.

In honour of their scarcity and undisputed beauty, I have crafted a crown worthy of their cardboard majesty.

For this show my intention was to create work that evokes the sense of being pushed in a certain trajectory by external forces such as the weather or the pandemic.

The benefits of working with 95% cardboard are that it offers limitless scope to create something that doesn’t conform to the traditional practices of paint, printing and sculpture. It is a friendly medium and a non-competitive art form that can be enjoyed without peer pressure or competition.

Cardboard is an intrinsic part of our lives which is largely overlooked and under-appreciated. We tear through the cardboard to seek out the treasures it holds within. We toss it aside, we burn it, we stamp on it, we rip it up.

With this show we celebrate cardboard. It’s versatile, it’s reliable and it can be transformed from something disposable into something thought-provoking, striking and near-permanent.

Note: all works in the show are made to be linked by a loose and friendly directive – to be constructed using 95% cardboard­_

Link to PDF of press release: