It's been a very busy time at Dungeness Open Studios. Last week, we welcomed 17 film crew involved in the production of a short sc-fi film called Black Shore. They filmed in the house, grounds and workshop with actors Matthew Steer, Jessica Raine and Austin Taylor. It is the realisation of a long-held dream of the directors, Jon Park and Grant White, who were joined by Leah Harris as Producer, Director of Photography, Zoran Veljkovic and Production Designer Steve Blundell, among others. They were hard working, friendly and fun, and we are looking forward to the premiere!


As the Black Shore team wanted a fairly gritty looking exterior we had held off on the much-needed paint job around and about, but it's been full on refurbishment ever since. Studio One has been re-painted and varnished as necessary. Studio Two has been whitewashed and The Lab has been refurbished inside as we have created a new, very elegant display screen which will also act as a drying space. This is timely as we can now begin working on a new show ('Spiritual') which will consist of all new material including paintings, prints, mixed media and photography.

After the creative chaos of film making we had a few Airbnb guests to host so the house was quickly returned to its fomer glory (!) and we met some lovely people who were visiting Dungeness for both work and pleasure.

In the garden, we are still planting new additions every day and the recent rain has helped to bring things on. The zenith hasn't yet been reached but we expect everything to bloom in the next couple of weeks. The lack of rain has had quite an effect on the beach. We have noticed fewer snails and nesting birds, and there don't appear to be as many rabbits or foxes. Plant life is different, too. Usually by now the digitalis and vipers bugloss are showing in abundance, but there is very little sign of them as yet. Good news for lizards though - they are everywhere!

Last night the French coast was visible for miles which happens rarely but the lights are quite beautiful. Speaking of which, we put up some lights as well...! 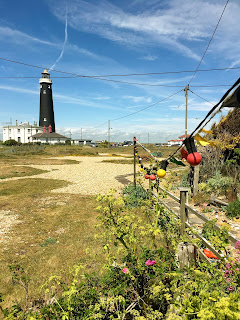 Posted by Unknown at 1:03 PM No comments:

The first of May was a first in more ways than one. After months of drought and absolutely no sign of 'April showers' we saw the welcome return of rain! For some time now we have been saving every drop of washing up and bath water for the garden and for seedlings that are coming on in the cold frame. As I write this on May 2nd, we are experiencing another refreshing weather front of gentle showers that will hopefully transform the scorched brown earth (not usually seen until August) into a lush and verdant carpet of grass and flowers.

As the shingle beach gives way to broom, vetch and bladder wort, the garden has seen daffodils and tulips come and go, and is now hosting irises, valerian, anenomes, wallflowers and the last of the bluebells. The rosemary bushes and borage are flowering and red hot pokers are beginning to bud.

New planting includes nasturtiums, borage, flax, poppies and sweet peas. Finding space for everything is becoming a challenge but some of the plants (including sea kale) have been potted up to sell to visitors — at bargain prices, of course...